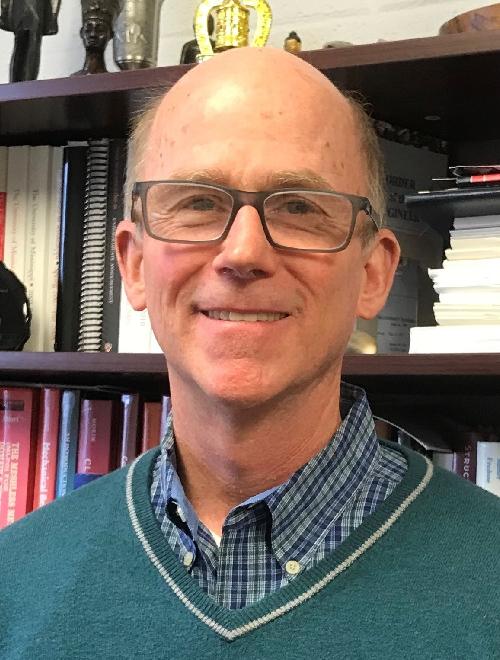 Chris Mullen is an Associate Professor in the Department of Civil Engineering at the University of Mississippi where he has served three years as Interim Department Chair. He earned his Ph.D. at Princeton University in 1996 and MSCE at Rice University in 1981. He completed a 1 year preceptorship in the Structure Group of what is now the NIST Engineering Laboratory after earning his BSCE at Rice in 1978. Before earning his PhD, Dr. Mullen engaged in professional practice for 10 years, the first 5 at Mobil R&D Corporation in the Offshore Engineering Division including a field assignment at Mobil E&P Southeast. During the other 5 yr, he worked for consulting firms, ADAPCO (1986- 1988) and WAI (1988-1991). He has served 25 continuous years at UM teaching courses in civil and structural engineering and conducting federally sponsored research projects for US DOE, DOT, and DHS, state sponsored projects for MEMA and MDOT, and paid consulting projects for varied private clients. The latter have including serving as an expert in bridge collapse forensics and insurance against hurricane damage. He has created and delivered courses on mechanics, steel and prestressed concrete structural design, capstone civil engineering design, bridge engineering, and finite element analysis. He has generated and maintained a sustained graduate program in earthquake and multihazard engineering and analysis of structural systems focusing on FE based simulation of bridges and buildings primarily. He has served as senior advisor to hundreds of students, thesis advisor to multiple Honors College students, and major advisor to 19 masters and 4 doctoral students. In 2002 he co-founded the UM Center for Community Earthquake Preparedness which generated the first FEMA approved earthquake component of the state Mitigation Plan and the first multihazard Disaster Resistant University mitigation plan for the UM main campus. In 2005 MEMA invited him to serve in their EOC during Hurricanes Dennis and Katrina offering guidance to the MEMA Executive Director and governor of MS. MEMA then invited him to serve as the MS representative on the FEMA Mitigation Assessment Team that summarized survey findings in FEMA 549. Dr. Mullen has been a member of ASCE since 1978, serving in its Structural Engineering and Engineering Mechanics Institutes. He has been actively engaged in technical committees, serving as chair of the SEI Methods of Analysis TAC and founding member of the EMI Objective Resilience TAC where he helped deliver a short course in China and contributed a chapter to a 4-volume ASCE Manual of Practice.